In commemoration of the centennial of woman suffrage and in light of the COVID-19 stay-at-home order which is keeping many families cooped up and is affecting many family’s finances, I have decided to make my book available as a free e-book from which you can print and color the pages you are interested in.
(If you have the funds and find the book valuable, consider supporting organizations who are fighting voter suppression, including: League of Women Voters, Fair Fight, American Civil Liberties Union or a charity of your choice.)

Designed to make history accessible to everyone from age eight to 108,  Remembering the Ladies: From Patriots in Petticoats to Presidential Candidates tells the story of the struggle for women’s rights in this country through coloring pages and lively profiles of 69 courageous & tenacious women of all colors and creeds who fought to enhance women’s political participation — from Dolly Madison to the Seneca Falls Convention in 1848, the 1920 passage of the 19th Amendment granting women the right to vote and the pioneering female activists and politicians who’ve worked to extend women’s economic, social, and political rights.

Why is this book different?

Whether you want to color, read, or use this book as a springboard to learn or do more, this book has something for all ages.

Perhaps the stories of these indomitable women and the suggested “Try This” activities can help us find the courage and strength to make a fairer and kinder world.

The print book is available at  Amazon  (where you can look inside and read reviews) or Barnes & Noble.  For bulk pricing, email  cslevin59 (at) gmail.com. Additional reviews at The Bucks Underground Railroad,  GirlsSucceed, My Central Jersey and Gold From the Dust.

Abigail Adams  (1744-1818)   by Crina Magalio © 2016  crinamagalioillustration.blogspot.com
“And by the way in the new Code of Laws…I desire you would remember the ladies… If particular care and attention is not paid to the ladies, we are determined to foment a rebellion and will not hold ourselves bound by any Laws in which we have no voice or Representation.”  – Abigail Adams, writing to her husband John at the Continental Congress on March 31, 1776

“The future depends entirely on what each of us does every day.”
— Gloria Steinem 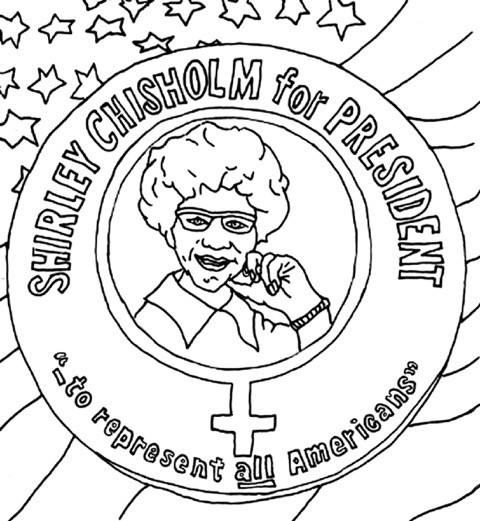 Matilda grew up in Cicero, New York, the only child of the only doctor in town. Both her parents encouraged her to read, learn, think, question and act on her beliefs. They were active abolitionists and her home was a station on the Underground Railroad.  She, herself, would later risk prison and a $2000 fine after the Fugitive Slave Law of 1850 criminalized assistance to escaped slaves. Matilda had big dreams – she wanted to become a doctor.  Her father had given her an extraordinary education: art, music, literature, Greek, philosophy, mathematics, plus the anatomy and physiology a doctor would need to know. But when she applied for admission at Geneva Medical College, her application was refused  – no women were allowed. Instead 18-year-old Matilda married and was soon a mother. Because she had young children to care for, Matilda missed the 1848 Seneca Falls Women’s Rights Convention and the one in 1850. But in 1852, when she was 26 years old, she attended the National Women’s Rights Convention in Syracuse, New York.  There she met Susan B. Anthony and made her first speech ever – in front of 2000 people! It was a remarkable speech. Showing both an amazing intellect and a sympathy for the poor and abused women in society, she quoted Goethe and Sir Isaac Newton, pointed out many examples of extraordinary women in history, then showed how the plight of poor and working women was a result of the unfair laws society imposed upon them. She soon became an active speaker and writer for the movement.

In 1869, she joined Susan B. Anthony and Elizabeth Cady Stanton to create the new National Woman Suffrage Association (NWSA) and was an officer for over 20 years.  She and nine other women attempted to vote in 1871 and she made compelling legal and moral arguments in 21 speeches defending  Susan B. Anthony’s right to vote after Susan was put on trial for trying to cast a ballot in the 1872 presidential election. Matilda worked hard to get the right to vote in New York and in 1880, after New York granted women the right to vote in school elections, Matilda led 102 other women to the polls. Along with Susan B. Anthony and Elizabeth Cady Stanton, she wrote and edited the first three volumes of The History of Woman Suffrage.

However in 1890, Susan B. Anthony, seeking a stronger united voice for women’s suffrage, spearheaded the merger between NWSA and  the American Woman Suffrage Association (AWSA). AWSA  members  supported the suffrage movement because they believed women’s votes would achieve temperance and Christian political goals. Matilda and Elizabeth Cady Stanton felt that this violated the separation of church and state. After the merger, Matilda founded  the Woman’s National Liberal Union (WNLU) as a place for radical and liberal women’s rights activists and became its president and the editor of its official journal, The Liberal Thinker.  In 1893, Matilda published the book Woman, Church and State arguing that Christianity had oppressed women and reinforced patriarchal systems and that religion had no place in government.  Her book also decried the brutal treatment of Native Americans and praised the Haudenosaunee (Iroquois) society which was a ‘Matriarchate’ in which women had true power, noting that descent through the female line and female property rights led to a more equal relationship between men and women. (Matilda had lived among the Haudenosaunee and been given the name Karonienhawi  “she who holds the sky”  when she was initiated into the Wolf Clan and the Council of Matrons  – the tribal elder females who chose the chiefs.)  Matilda died in 1898, a few months before the 50th anniversary of the first woman’s rights convention. Her memorial stone reads, “There is a word sweeter than Mother, Home or Heaven. That word is Liberty.”

Fascinating Factoids: Matilda’s youngest daughter married L. Frank Baum, the creator of The Wizard of OZ stories and Matilda was the inspiration for the good witch Glenda.  Ironically, Matilda was literally written out of the history of the suffrage movement.  Susan B. Anthony, who outlived Matilda, chose her own biographer, Ida Hustad Harper, to write the 4th volume of the History of Women’s Suffrage 1883-1900 and Ida eliminated any mention of Matilda’s contributions.  In 1993, the scientific historian Margaret W. Rossiter created the term “Matilda effect” to describe when female scientists receive less credit for their scientific work than it deserves.

Additional sample images — all images copyright their illustrators, please do not reuse without permission.

Rose Schneiderman (1884-1972)  Labor Organizer, Founder of the Ladies Garment Workers Association
by  Mariya Kovalyov © 2016    www.happyfamilyart.com
Fascinating Factoid:  The famous political slogan and strike song “Bread and Roses“ originated in a speech given by Rose Schneiderman where she said “The worker must have bread, but she must have roses, too” (calling for both fair wages and dignified working conditions).

Alice Paul (1885-1977)   by Laura Davidson © 2016
Feminist, Suffragist, and Political Strategist
“Unless women are prepared to fight politically they must be content to be ignored politically.”

Ella Baker (1903-1986) “Unsung Heroine of the Civil Rights Movement” by Aarti Arora © 2016
“Until the killing of black men, black mothers’ sons, becomes as important to the rest of the country as the killing of a white mother’s sons, we who believe in freedom cannot rest until this happens.” (1964)

Gloria Steinem  (1934- ) Founder of Ms. Magazine by Jill Schmidt © 2016
Champion of the Women’s Rights Movement “The only alternative to being a feminist is being a masochist.”

Elouise Pepion Cobell (1945-2011) “Yellow Bird Woman”  by Aarti Arora © 2016  Tribal Activist who Worked to Restore Funds Owed to Native Americans
“This young person was so ignorant to us, it was so bad. He told me, ‘We ought to be charging you for the handling of this money.’ I almost jumped across the table.”

Nancy Pelosi (1940- ) First Woman to become Speaker of the House by Kim Wood © 2016 kimwoodstudio.com
“I accept this gavel in the spirit of partnership. It is a moment for which we [women] have waited over 200 years. Never losing faith, we waited through many years of struggle to achieve our rights. We worked to redeem the promise of America, that all men and women are created equal. For our daughters and our granddaughters, today we have broken the marble ceiling.”  – Nancy Pelosi on becoming Speaker of the House

Marian Wright Edelman (1939- ) Founder of the Children’s Defense Fund by Sheryl Depp © 2016   primarilyartwithmrsdepp.blogspot.com
“You just need to be a flea against injustice. Enough committed fleas biting strategically can make even the biggest dog uncomfortable and transform even the biggest nation.”
“A lot of people are waiting for Martin Luther King or Mahatma Gandhi to come back – but they are gone.   We are it. It is up to us. It is up to you.”

Elizabeth Warren (1949-) by Aditi Tandon © 2016 http://www.TwoDotts.com
Feisty Democratic Senator and Consumer Advocate
“People have hearts, they have kids, they get jobs, they get sick, they cry, they dance.
They live, they love, and they die. And that matters.”

Remembering the Ladies: From Patriots in Petticoats to Presidential Candidates.  Carol Simon Levin portrays Abigail Adams — who famously wrote to her husband John asking that the Continental Congress “remember the ladies” when drafting new laws for the new nation. He wrote back that she was “so saucy” and he and the rest of the Congress ignored her pleas completely.  “Abigail” then looks forward in time to tell the stories of some of the courageous and tenacious women of all colors and creeds who fought to enhance women’s political participation.