All my programs are also available as webinars.
Click here to see a list of upcoming performances.
Contact me for info or to schedule a program. 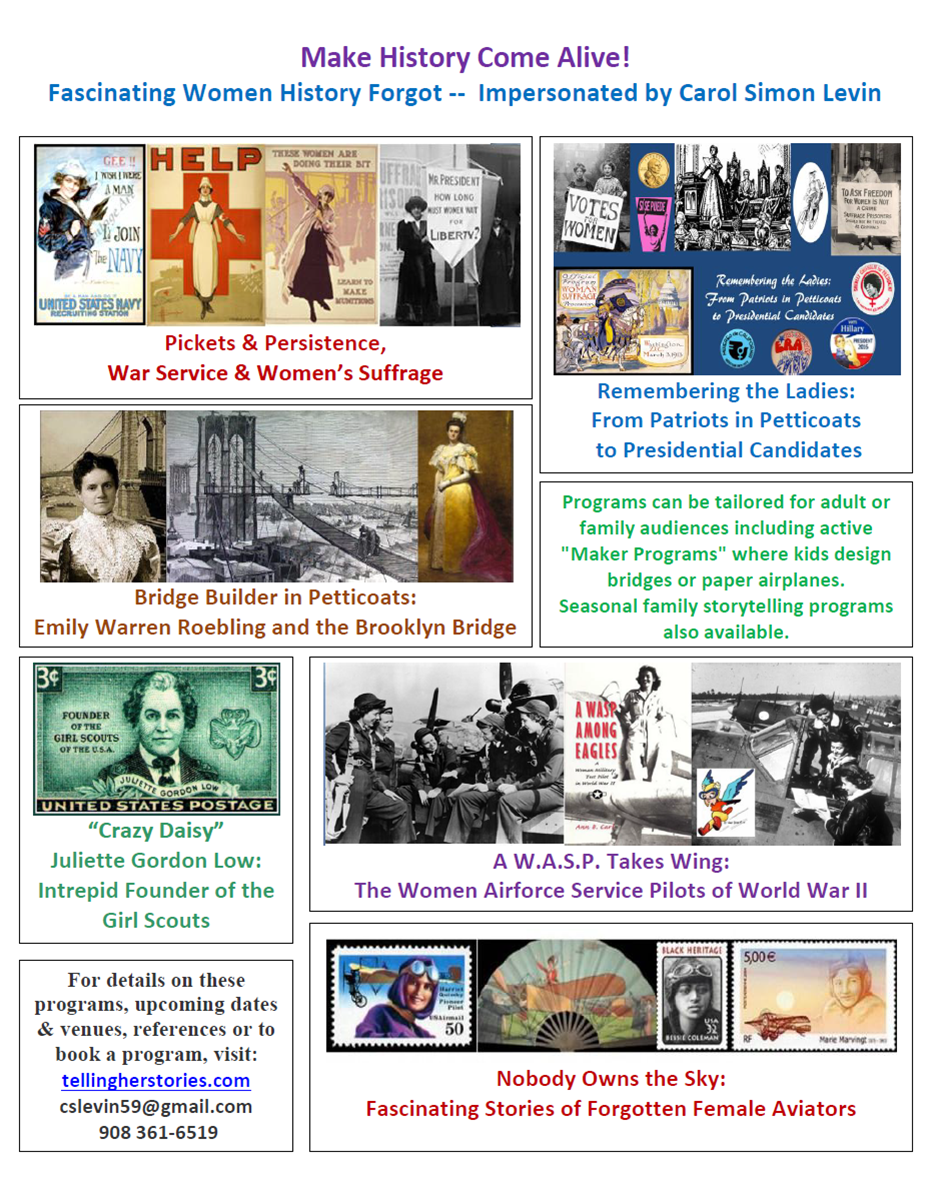 Looking for ideas for reading, math, science, history, art, theater, music, magic and fun for kids in your life during this time of COVID-19?
Check out my family learning guide.

I was interviewed on NJ’s 1776-1807 experiment with woman suffrage on
WNYC-FM’s “All of It” with Alison Stewart Listen to the program online.
My performance on Suffrage Forward as Abigail Adams discussing the NJ Constitution is here (begins at 3:05). View my slide show of early suffrage in NJ

You can also read a NY Times article, hear staff from the Museum of the American Revolution (starts at 13:45) and read my NJ Studies review of the Museum’s new exhibit “When Women Lost the Vote” highlighting new discoveries about NJ’s early women voters (virtual exhibit & timeline), check out a NJPBS program on area suffragists and see the virtual exhibit on NJ Women Voting at the Old Barracks Museum, Women’s Suffrage Centennial 2020 + Other Women’s Rights Programs/Online Exhibitions

“Thank you for coming to the Wayne Public Library to present “Remembering the Ladies: From Patriots in Petticoats to Presidential Candidates.” This is a wonderful history about so many bright, strong women who should be in all of our history books!…You did a masterful job of organization and short, memorable descriptions… If only they had been listened to in their time, I wonder what our society would be like today.” — D.R.

“Yesterday at the library I learned about women in history. I learned that there is hope, and that the troubles we face right now are difficult, but women like Abigail Adams and Sojourner Truth and so many others worked very hard, faced major adversity, and that was difficult too. Learn from them. I encourage you to read and learn about the past and that will help you find hope and courage to fight in the future.”  — C.M. (Girl Scout mom)

Remembering the Ladies: From Patriots in Petticoats to Presidential Candidates (based on her book of the same name). Carol Simon Levin portrays Abigail Adams — who famously wrote to her husband John asking that the Continental Congress “remember the ladies” when drafting new laws for the new nation — something the new Congress definitely did not do!  “Abigail” then looks forward in time to tell the stories of courageous and tenacious women of all colors and creeds who fought to enhance women’s political participation — from Dolley Madison to the Seneca Falls Convention in 1848, the 1920 passage of the 19th Amendment granting women the right to vote and the pioneering female activists and politicians who’ve worked to extend women’s economic, social, and political rights into the 21st century.

Carol Simon Levin impersonates Emily Warren Roebling to tell the story of the woman who helped manage the construction of the Brooklyn Bridge, considered one of the most amazing technological achievements of its time, the “Eighth Wonder of the World.” Later she helped design the family mansion in Trenton, studied law, organized relief for returning troops from the Spanish American War, attended the coronation of the Tsar of Russia and even took tea with Queen Victoria. At her death, she was called “the most famous woman in New Jersey” and “one of the most noted women in the country,” yet today almost no one knows her name!

Many books and films have featured the Brooklyn Bridge and millions of people have crossed it. Built between 1869 and 1883, without modern machines or even electric light, it was one of the most amazing technological achievements of its time. Yet few people know that a woman helped manage much of its construction.  After her husband was bedridden, Emily Roebling became his liaison to the project – eventually communicating with the engineers and suppliers so well that it was rumored that she had become the Chief Engineer herself! Later she helped design the family mansion in Trenton, studied law, organized relief for returning troops from the Spanish American War, attended the coronation of the Tsar of Russia and even took tea with Queen Victoria. At her death, she was called “the most famous woman in New Jersey” and “one of the most noted women in the country,” yet today almost no one knows her name!

Nobody Owns the Sky: Fascinating Stories of Forgotten Female Aviators
nobodyownsthesky.wordpress.com
Carol Simon Levin portrays Elinor Smith Sullivan to tell the stories of some of the early female pilots who risked their lives in flimsy wood and canvas aeroplanes  but whose ground-breaking exploits were lost to history after Amelia Earhart’s famous disappearance.  Executing audacious acrobatic aerial maneuvers, soloing across the English channel, setting records, barnstorming and buzzing beneath New York’s bridges,  they were determined to show that anything that men could do, they could do too!

Carol Simon Levin tells the story of the amazing Women Airforce Service Pilots through the eyes of Ann Baumgartner Carl, the Jersey girl who trained as a WASP, became the only American woman to test-fly experimental planes during the war, and the first American woman to fly a jet airplane!

During World War II, more than one thousand women volunteers completed the WASP military pilot training program. They endured terrible Texas weather, snakes, spiders and scorpions, as well as the hostility of some male instructors.  Graduating WASPs piloted every kind of military aircraft, tested new and overhauled airplanes (some with defective parts or dangerous reputations), delivered more than 12,000 planes, and flew over 60,000,000 miles (sometimes towing targets that soldiers shot at with live ammunition!) Thirty-eight of them died serving their country. Then they were told that men needed their jobs and they were dismissed and forgotten. Hear Carol Simon Levin bring their story back to life.

Please click on the links for more information about these programs.

Keep up on the latest news on books & performances at www.facebook.com/TellingHerStories

“Thank you again for a wonderful program last night! I am still haunted by thoughts of Emily….you made her come so alive…..and I learned more about the Brooklyn Bridge than I thought I would ever know in my whole life!” — Nora, Ocean County Library

“Thank you for presenting a wonderful program that was so informative and enlightening.  Your knowledge and creative storytelling fosters uncovering the truth of our past heroines.” — Nancy, Somerset Run Singles

“I was somewhat skeptical  when Lilyan invited me to your program. As a pilot for many years I thought that I knew I everything about women pilots. What a surprise. Your program taught me so very much and your presentation was outstanding. I am sending your information to as many women as I can. I know that anyone who attends your program will be as excited as I am.” —  A.L.

“Fascinating to learn of women who were so successful and we never heard of them!” — W.M.

“Thank you for coming to Wayne Public Library to present your program “Nobody Owns the Sky.”…This is a wonderful program about the most amazing women. What athletic prowess — for some even into their nineties!… highly recommended. — D.R., Adult Services Librarian

If you love women’s history, I also highly recommend the podcast “The History Chicks“